I was recently inspired by a tweet from Amy Kingsley (@MissKingsley85), a fantastic Primary School teacher that I have had the pleasure of working with at her School in Tameside, Manchester. She tweeted a short slideshow of images showing her KS1 pupils using WeDo 2.0 to build and code Santa Sleighs. I loved this idea as it is a great example of how you can use the simple Base Models that are readily available in the WeDo 2.0 software and then adapt them to meet the needs of a specific topic or theme..

So, I thought I would put together this short blog post, which explores how you can incorporate this activity into the classroom step by step, whilst following the LEGO® Education 4c approach. I have included a simple graphic below that highlights the 4cs but if you would like to learn more you can read the LEGO® Education Manifesto here.

It is important to connect pupils to the content and awaken their curiosity, which will, in turn, motivate them and excite them about the challenge ahead. In the case of this activity we could use the following scenario or similar

Every Christmas Eve, Father Christmas delivers presents to over 700 million children in one night! That means he visits roughly 233 million houses and travels over 212 million miles!

Santa has been doing this for a long time now; his old Sleigh is starting show signs of wear and tear and his Reindeer are getting very tired! Can you help him by building and coding him a new, modern Sleigh?

The pupils can then act as a team of engineers, that have been asked by Father Christmas to build him a new Sleigh, that is capable of moving without the need for Reindeer Power. You can then build on the task by stating that the Sleigh needs to use a motor and be controlled by a code that will move it forward as fast as possible.

*I grabbed the figures from a great Telegraph article published back in 2009 - http://www.telegraph.co.uk/topics/christmas/6859529/Father-Christmass-Christmas-Eve-in-figures.html

LEGO® Education activities are all based on ‘hands-on’ learning experiences and therefore construction is a key aspect...it’s time to start the build! As this is a unique activity and is not part of the project library in the WeDo 2.0 software, we will need to use the Model Library for inspiration.

The Model Library is a repository that contains build guides for Base Models of key mechanisms that you may want to use in your WeDo 2.0 constructions.

In this case, we will need to use the Drive Base Model, which will provide the motor mechanism we need for our new sleigh designs.

I would encourage you to explore the entire Model Library as it contains 16 different Base Models, each of which offers a different mechanism. The Base Models also provide pupils with opportunity to learn about some Simple Machines, including gears, pulleys and levers.

Pupils can now work in pairs to create their Sleigh base by using the Drive Base Model and following the build guide. Once this is created they can then add their own elements that will make their own unique design take shape. 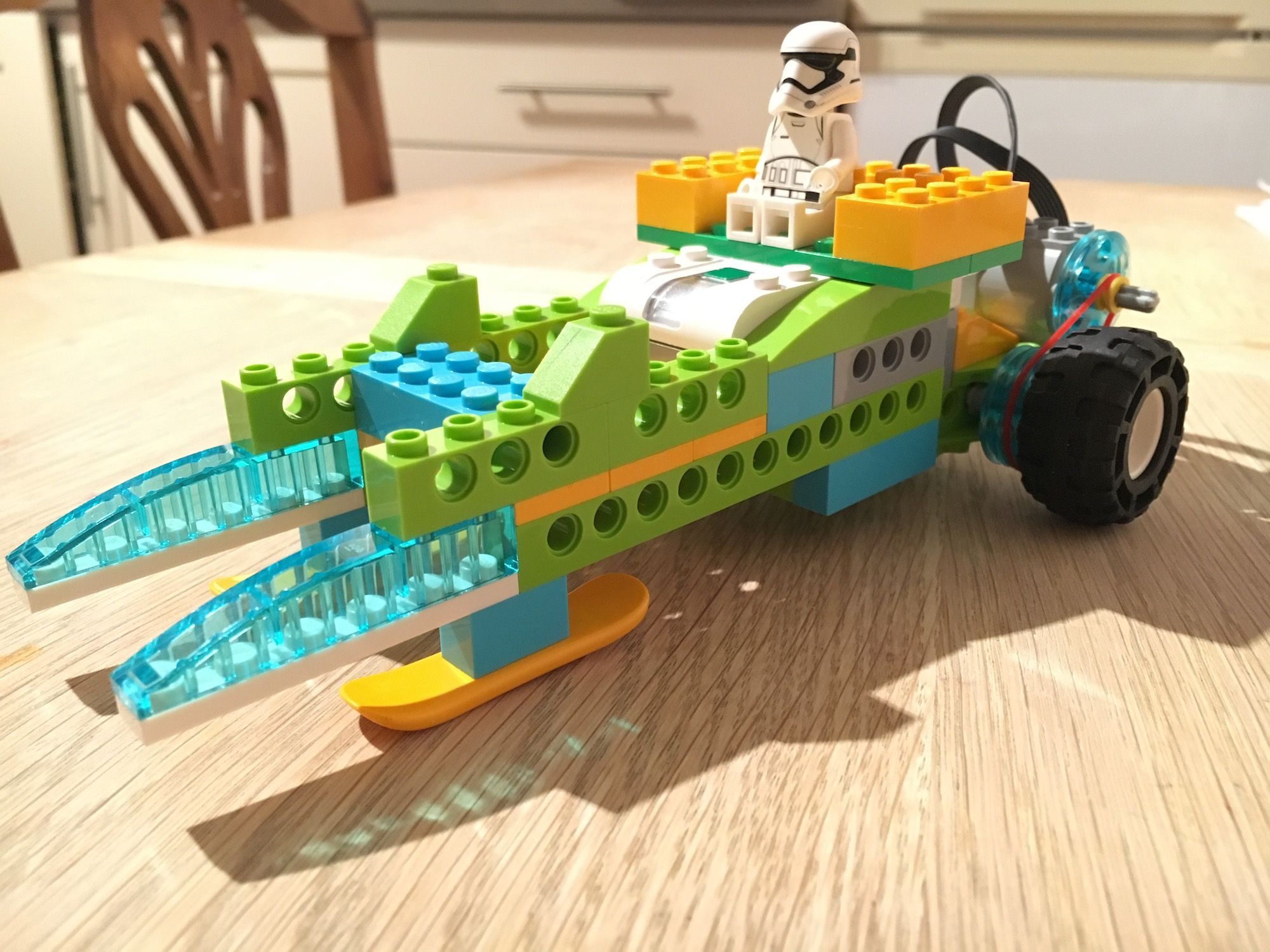 Pupils can use other structural LEGO elements in the WeDo 2.0 kit, or they could use any other LEGO bricks as they are all compatible.

You could even throw in a Father Christmas Minifigure for good measure if you have one to hand! Sadly, I didn't have one so I substituted in a Storm Trooper. Opposite you will see the Sleigh design that myself and my son came up with, which he lovingly called 'The S-2'.

The contemplate phase of the 4cs is where your role as the teacher and facilitator come into play. Throughout the time pupils are building and coding it is key to ask facilitating questions that encourage pupils to reflect on what they are learning. It is also important to encourage pupils to share their ideas with other groups and challenge each other’s ideas.

You will also find contemplation is a constant when the pupils are working together in pairs. The working relationship they are engaged in facilitates the sharing of ideas and the testing and modification of their own solutions.

Once the pupils have finished building their Sleighs they can use the programming blocks and make their sleigh move. The Drive Base Model comes with a build guide but also an example programming string that pupils can copy, test and modify.

Once their Sleighs are moving we can start to incorporate challenges by changing the programming blocks for the motor, making the sleigh travel faster or slower, in different directions or for specific lengths of time.

While they are exploring the different outcomes they can create with different programming blocks, they may come across some issues or barriers they have to overcome. These issues could relate to their programme, i.e their sleigh does not do what they expect and they, therefore, need to use logical reasoning skills to debug their programme and solve the problem. They may also face issues and challenges that are related to their build i.e pieces fall off when it moves and they, therefore, need to use their engineering and design skills to solve the problem. I feel that these situations are where the really valuable learning takes place and is also where they develop other key soft-skills, such as resilience. 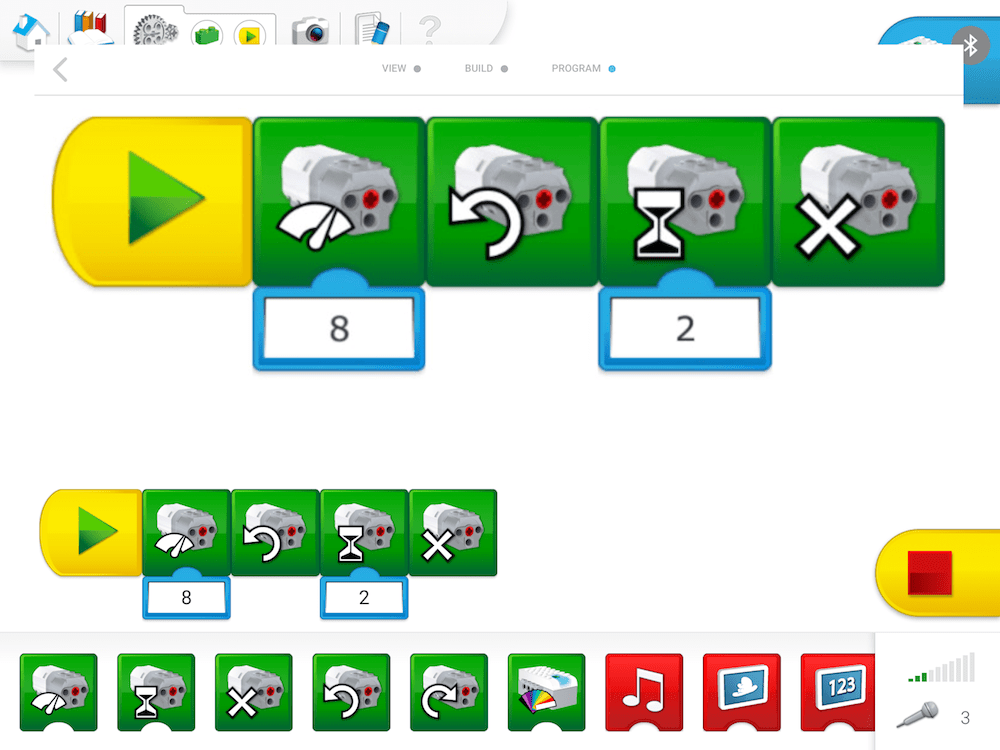 Every LEGO® Education activity should be open-ended and provide possibilities to extend the learning in a range of ways, both in terms of the coding and also the build and design. In this activity we could challenge the pupils with the following questions:

We are very close to the Christmas break now, so you may not be able to try this in your classroom this time around. However, I hope you find the above useful as the same activity could apply to other topics or seasons. For example, instead of Sleighs, you could build Tanks as part of a World War 2 topic!

Obviously, this activity requires you to have access to LEGO® Education WeDo 2.0 kits in your school. If you do not have any currently, but would like to find out more, please don't hesitate to visit our LEGO® Education section.

If you enjoyed this activity, visit our STEM blog section!