Why Mac is Great for Photographers
By Mike Jelves
15 November, 2019 by

Teaching Creative Arts is a challenge for both students and educators alike. Not only do abstract and intangible elements have to be uncovered and nurtured, but practical skills have to be learnt.

There are often multiple stages involved to get an idea out of mind and into the world. With photography, there are unique challenges to the creative process. Firstly, aspiring photographers must know how to compose a frame and understand techniques such as the Rule of Thirds. Then there’s appreciating the importance of lighting, and how shade and the absence of light can be just as powerful as its presence. With the basics of visual language onboard, they must then get to grips with the camera itself. Technical aspects such as the Exposure Triangle and how to achieve competency in image quality are necessary foundations of experimentation.

Each camera and lens combination represents a vast array of options for shooting in different conditions and for different outcomes. Sports and fashion photographers might use the same kit, but knowing how their cameras can be adjusted accurately to each scenario makes the difference. 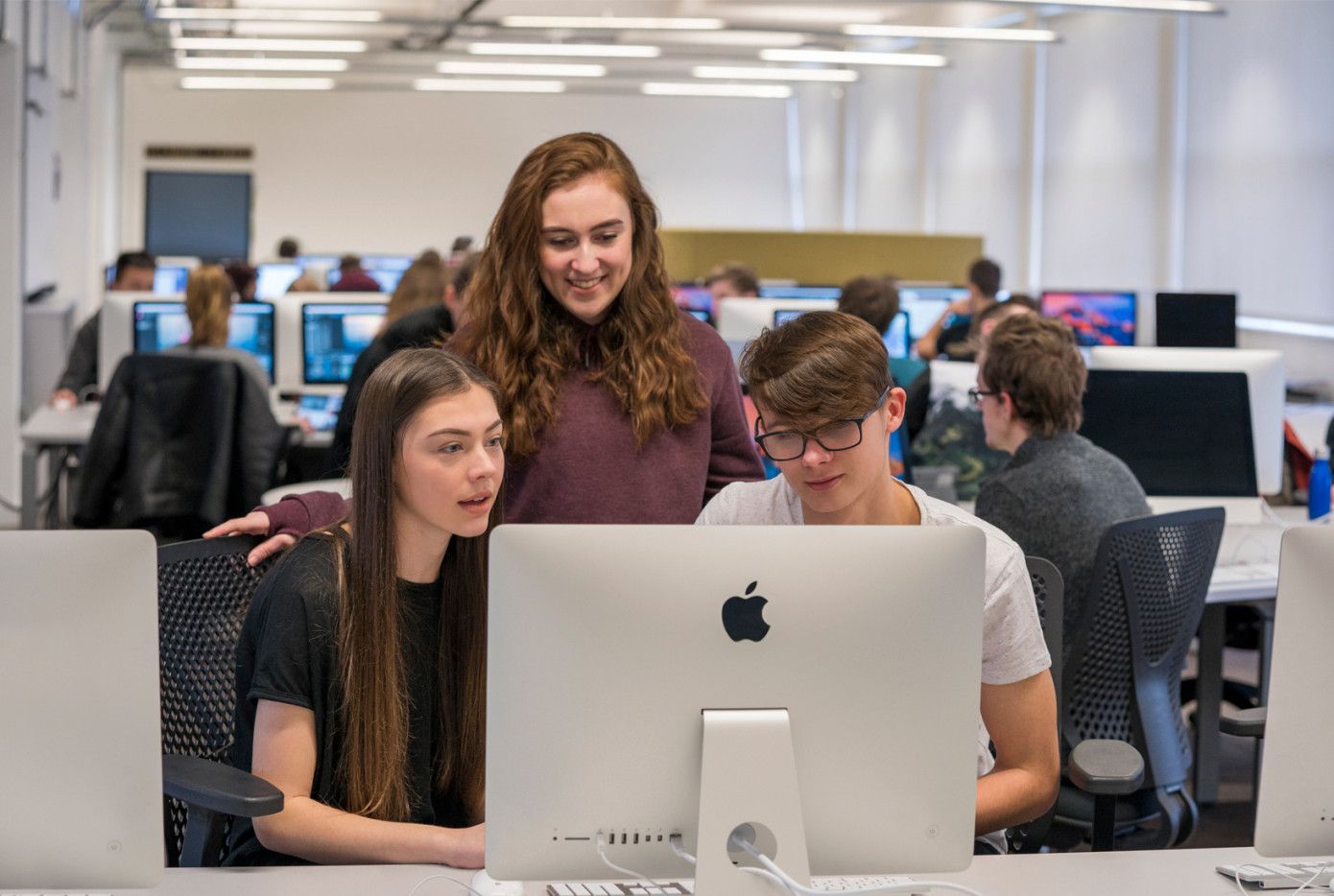 Once the photos are taken, the challenge then becomes how best to process, edit and share the images. Whether there’s a computer needed on-set in a studio, outside on location, or available to use in an office environment, Apple products are ubiquitous in the world of professional photography.

The evident aesthetic qualities aside, Macs offer a stable and secure ecosystem that users can rely on and trust. The UNIX-based macOS is designed and built around the physical components inside each machine. The harmonious balance of software and hardware delivers a smooth and unobtrusive user experience, designed with efficiency in mind.

This symbiosis of operating system and device allows more substantial tasks, such as image processing and rendering, to be delegated the right amount of power required from the GPU by the CPU. Indeed, managing appropriate use of the graphics card at all times is another example of how Macs maintain performative reliability.  This is particularly reassuring for photographers who work with RAW files, as they are much larger than the standard jpeg images produced by non-professional cameras.

There is also a range of programmes available for photographers to use on the Mac. These range from native applications, to third-party solutions offering escalating degrees of creative control.

Before the turn of the 21st century, the Mac was widely seen as the domain of the creative artist, and not something an everyday personal computer would appreciate. They would be found in design agencies, film editing suits and music production studios, but still weren't particularly pervasive amongst domestic scenarios.

This perception changed, however, with the popularity of Apple's iPod, and the subsequent emergence of the iPhone and iPad. Once people become more familiar with Apple products, curiosity extended to the Mac as it was readily adopted when people were familiar with the mobile devices. This is because of the strengths and usability of the iOS mobile operating system mirror those of the desktop macOS software. Put simply, if you know how to use an iPod, iPhone or iPad, you know how to use a Mac. 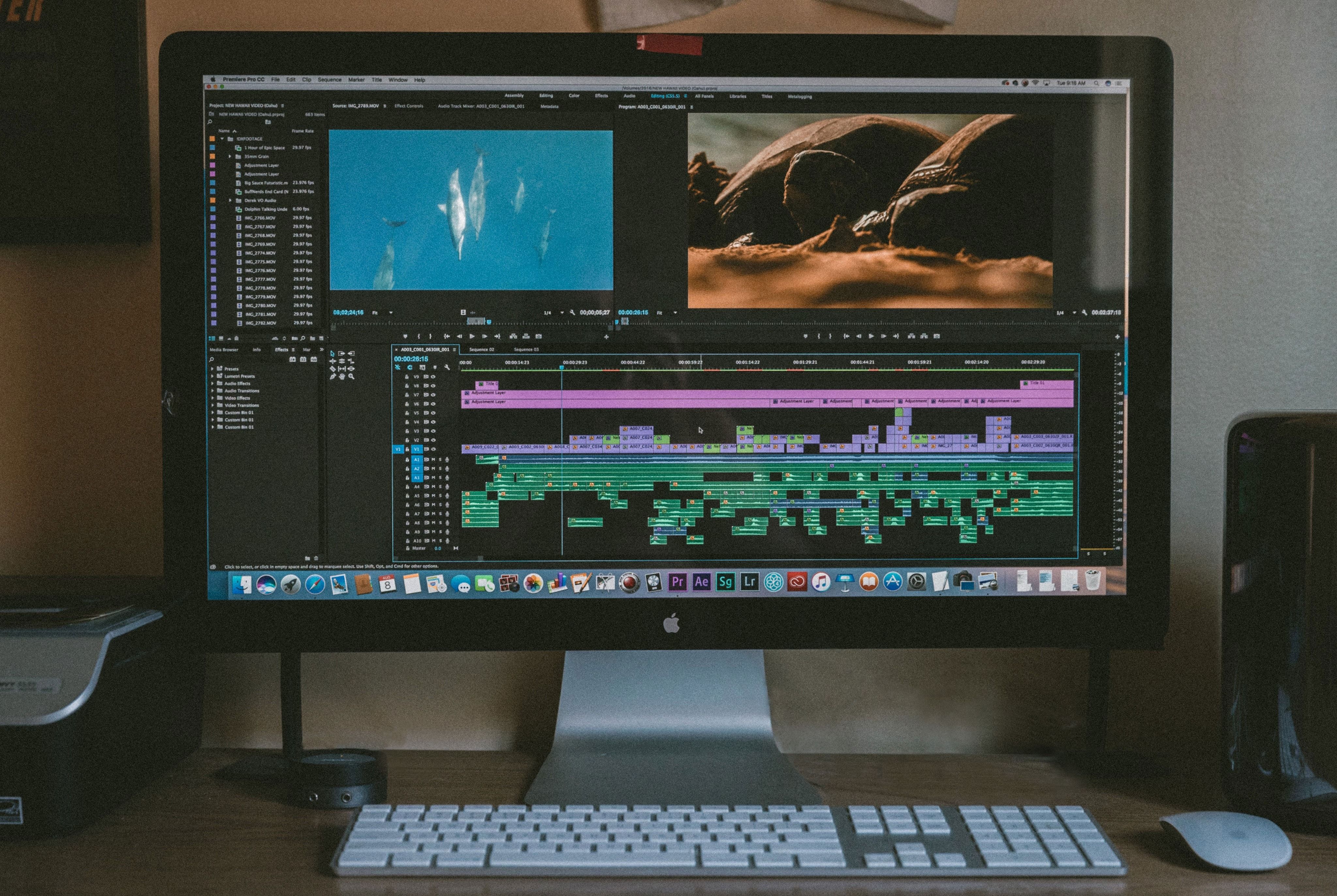 It also means that the colour management system used on the Mac is consistent across a range of creative applications.  This includes Preview - the native image viewing application - Final Cut Pro X, QuickTime, Adobe Lightroom and Photoshop.

As standard, Apple’s photo editing software comes preinstalled on every Mac. Launched in 2015, it came a year after the iOS version first appeared. It represents not just continuity between Apple devices but also simplified the native options for photography software.

The workflow for photographers working on the Mac can simply begin and end with Photos. Connecting the camera or memory card reader via USB prompts the import process, after which albums can be manually created. Automatic groupings of images based on location data, the faces present and the times at which they were taken all occur in realtime, and can be adjusted at any other time.

There’s a surprisingly advanced set of tools for editing images in Photos. Everything from exposure correction, red-eye removal, colour balance and saturation to retouching, selective colour adjustment and noise reduction are available. The layout is easy to understand, and changes happen in realtime, so the effect of each tweak is instantly visible.

Filters offer quick ways of adding a stylised look to images, while the Crop tools allow for photos to be flipped, scaled and set within certain aspect ratios. Using the Markup feature transposed from the Preview app; images can also be annotated for feedback and collaboration with tools such as freehand drawing, shapes and text boxes.

The non-destructive nature of Photos means that if ever an edit goes too far, the option to Revert to Original always remains open. Images can, of course, be duplicated before editing begins, but such peace of mind is always reassuring on creative endeavours.

With the integration of iCloud Photos, it’s also easy to share images taken on iPhone or iPad directly with the Mac, using online synchronisation. It’s also notable that Photos using the same classifications of Video, Selfies, Panoramas, Slo0mo, Bursts and Screenshots as the mobile version of Photos. This continuity is ideal for any keen iPhone photographers.

When it comes to working on photos that only require a standard colour correction and easy to use organisation, there is often no need to look beyond the native Photos app. When more advanced editing or manipulation is required, however, there are third-party solutions.

Everybody has heard of Photoshop, but that isn’t necessarily the best place for basic photo editing and technical adjustments. As an alternative to Photos, Lightroom offers similar import, organisational and creative methodologies to take control of your workflow, but with the look, terminology and familiarity of Adobe’s Creative Cloud suite.

Lightroom’s library system makes organisation easy, and the filmstrip view makes it simple to review lots of photos, but also quickly copy and paste corrective settings across multiple images at once. It also employs are a more direct method of saving the files on your Mac in a designated folder, instead of the closed method used by Photos.

The key differentiator is the integration and application of third-party extensions, plugins and presets available for Lightroom. There’s a large number of filters pre-loaded, but this can be added to in much the same way plug-ins can be utilised with other Adobe programmes.

Presets are designed to be applied en masse with one click, while a preview of the resulting process is made available before direct application. Plugins are small, separate applications that lift images from Lightroom and return them as a new file afterwards. The idea is that specific effects or enhancements are possible in the plugin, that is superior to a native function, or otherwise unachievable in Lightroom.

While this may not be necessary for standard photographic editing or workflows, the artistic limits of work can be further explored with such additional functionality. They represent the halfway stage between the editing in Lightroom and the layered approach to imagining alteration in Photoshop.

The term ‘Photoshopping’ has become synonymous with altering and manipulating images to achieve otherwise unnatural results. In the beauty and fashion industries, the phrase is associated with changing how models look to enhance their natural features and ‘improve’ characteristics like complexions, eye colour and skin tone.

On a broader scale, Photoshop provides advanced photographic editing but also compositing processes that go beyond what can be achieved with Photos of Lightroom. By using Layers, levels upon levels of effects, masks and alterations can be applied to a single image to transform its appearance completely. Canvasses can also be built using multiple source images, or elements extracted from those articles.

Indeed, it would be overkill to bring each photograph from a recent shoot into Photoshop, for simple tasks like colour balance, exposure correction, or turning them black and white. It's very much a case of using a hammer to crack a nut.

Instead, Photoshop exists to use photographs as a source of inspiration. A jumping-off point towards turning that image into something more significant, such as an advertising poster, album cover or other such creative artwork.

In a world of mixed media creations, photography is at the very heart of the creative industries. The overwhelming dominance of visual culture is impossible to ignore, especially as social media accelerates the sharing of content globally.

Preparing students for life outside of education means exposing them to the tools used by industry professionals. The Mac, in combination with Apple’s software and augmented by third-party developers like Adobe forms the backbone of the creative industries. The same spine should run throughout the classrooms that nurture and inspire young talent.

If you liked this article, read how Mac is ideal for filmmakers or visit our Mac blog section for more tips.